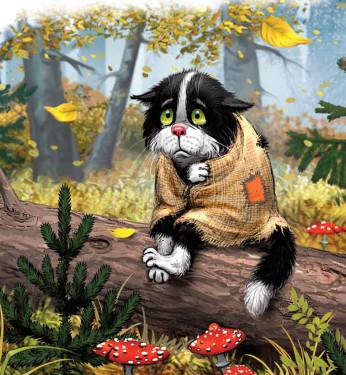 There was once a man who had a Cat so old that he could not even catch mice.

"What shall I do with this old Cat of mine?" said the man to himself.

"How will I feed him? I think I'll take him to the forest and let him take care of himself!”

And he took the Cat to the forest and left him there.

By and by a Fox came running up and saw the Cat.

And the Cat replied:

The Cat agreed to marry the Fox, and the Fox took him with her to her house. She tried very hard to please him. If she caught a chicken she would not eat it herself but bring it to him first even if it meant that she had to do without.

One day the Fox met a Rabbit who said to her:

"I am going to come and pay you a visit, Little Sister Fox."

"You mustn't do that," the Fox said. "I have Sir Cat-o-Puss living in my house now. He might claw you to death.”

Off ran the Rabbit and he told the Wolf, the Bear and the Wild Boar what the Fox had said. So they all got together and began to think how they were to get to meet Sir Cat-o-Puss.

"Let's invite him to dinner!” said they.

They talked over the menu, and the Wolf said:

"I will go and get the meat for the borshch.”

"And I will go and fetch the beets and potatoes," said the Boar.

"And I will bring some honey for dessert," said the Bear.

And as for the Rabbit, he ran off to get some cabbage.

They brought all these good things and set to cooking them. But when everything was ready they couldn't agree as to which of them was to go and invite Sir Cat-o-Puss.

"I'm rather clumsy too, I'm afraid,” said the Boar.

So that left only the Rabbit.

Off he made at a run for the Fox's house, and wasn't the Fox sur¬prised to see him standing on his hind paws in front of it!

"What do you want?" she asked.

"Please, Fox, the Wolf, the Bear, the Boar, and I too would very much like to have you and Sir Cat-o-Puss dine with us today,” the Rabbit said.

"That's nice of you!" said the Fox. "I'll certainly come and Sir Cat-o-Puss will come with me, only the four of you must hide or he might claw you to death!"

Back ran the Rabbit, and he told his friends about it. And, oh, how frightened they were! The Bear climbed a tree, the Wolf crouched behind a bush, the Rabbit hid under it, and the Boar tried to hide beneath a pile of brushwood. 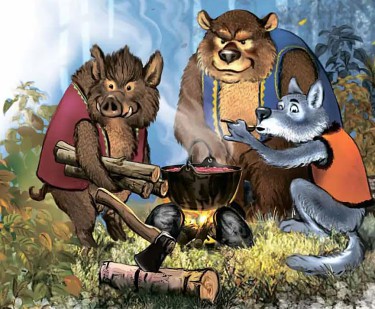 By and by the Fox arrived with Sir Cat-o-Puss at her side. She led him to the table, and when he saw the meat he was pleased and said: "Miaow- miaow-miaow!"

And the four friends said to themselves:

"Was there ever a beast so fierce! Nothing seems to be enough for him. At this rate he might eat us up too!", Sir Cat-o-Puss climbed up onto the table and began gobbling up the food. And when he had had his fill he curled up and fell fast asleep.

Now, the Boar was hiding nearby beneath a pile of brushwood, with only his tail out, and a Mosquito flew up just then and bit it. The Boar could not help himself, he twitched his tail, and Sir Cat-o-Puss, who thought it was a mouse, rushed at it and caught it between his teeth. The Boar sprang up and away he ran as fast as his legs could carry him! 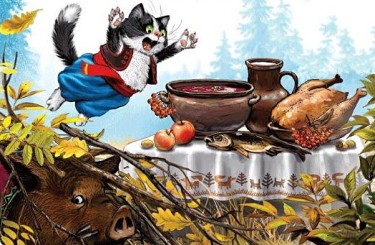 And Sir Cat-o-Puss leapt up into the tree close to where the Bear was sitting. Seeing him, the Bear climbed higher, but the branches broke under him and he tumbled down straight onto the Wolf's back and nearly crushed him! Up the two of them jumped and away they rushed, and the Rabbit ran after them so fast that he could not have said afterwards where his feet had taken him!

The four of them came together again after a while and they talked it all over.

"Sir Cat-o-Puss is small, but he nearly ate up all four of us!” they said.