Once upon a time there was a man who had fine houses, both in town and country, a deal of silver and gold plate, carved furniture, and coaches gilded all over. But unhappily this man had a blue beard, which made him so ugly and so terrible that all the women and girls ran away from him.

One of his neighbors, a lady of quality, had two daughters who were perfect beauties. He asked for one of them in marriage, leaving to her the choice of which she would bestow on him. They would neither of them have him, and they sent him backward and forward from one to the other, neither being able to make up her mind to marry a man who had a blue beard. Another thing which made them averse to him was that he had already married several wives, and nobody knew what had become of them.

Blue Beard, to become better acquainted, took them, with their mother and three or four of their best friends, with some young people of the neighborhood to one of his country seats, where they stayed a whole week.

There was nothing going on but pleasure parties, hunting, fishing, dancing, mirth, and feasting. Nobody went to bed, but all passed the night in playing pranks on each other. In short, everything succeeded so well that the youngest daughter began to think that the beard of the master of the house was not so very blue, and that he was a very civil gentleman. So as soon as they returned home, the marriage was concluded.

About a month afterward Blue Beard told his wife that he was obliged to take a country journey for six weeks at least, upon business of great importance. He desired her to amuse herself well in his absence, to send for her friends, to take them into the country, if she pleased, and to live well wherever she was.

“Here,” said he, “are the keys of the two great warehouses wherein I have my best furniture: these are of the room where I keep my silver and gold plate, which is not in everyday use; these open my safes, which hold my money, both gold and silver; these my caskets of jewels; and this is the master-key to all my apartments. But as for this little key, it is the key of the closet at the end of the great gallery on the ground floor. Open them all; go everywhere; but as for that little closet, I forbid you to enter it, and I promise you surely that, if you open it, there’s nothing that you may not expect from my anger.”

She promised to obey exactly all his orders; and he, after having embraced her, got into his coach and proceeded on his journey.

Her neighbors and good friends did not stay to be sent for by the new-married lady, so great was their impatience to see all the riches of her house, not daring to come while her husband was there, because of his blue beard, which frightened them. They at once ran through all the rooms, closets, and wardrobes, which were so fine and rich, and each seemed to surpass all others.

They went up into the warehouses, where was the best and richest furniture; and they could not sufficiently admire the number and beauty of the tapestry, beds, couches, cabinets, stands, tables, and looking-glasses, in which you might see yourself from head to foot. Some of them were framed with glass, others with silver, plain and gilded, the most beautiful and the most magnificent ever seen.

They ceased not to praise and envy the happiness of their friend, who, in the meantime, was not at all amused by looking upon all these rich things, because of her impatience to go and open the closet on the ground floor. Her curiosity was so great that, without considering how uncivil it was to leave her guests, she went down a little back staircase, with such excessive haste that twice or thrice she came near breaking her neck. Having reached the closet-door, she stood still for some time, thinking of her husband’s orders, and considering that unhappiness might attend her if she was disobedient; but the temptation was so strong she could not overcome it.

She then took the little key, and opened the door, trembling. At first she could not see anything plainly, because the windows were shut. After some moments she began to perceive that several dead women were scattered about the floor. (These were all the wives whom Blue Beard had married and murdered, one after the other, because they did not obey his orders about the closet on the ground floor.) She thought she surely would die for fear, and the key, which she pulled out of the lock, fell out of her hand.

After having somewhat recovered from the shock, she picked up the key, locked the door, and went upstairs into her chamber to compose herself; but she could not rest, so much was she frightened.

Having observed that the key of the closet was stained, she tried two or three times to wipe off the stain, but the stain would not come out. In vain did she wash it, and even rub it with soap and sand. The stain still remained, for the key was a magic key, and she could never make it quite clean; when the stain was gone off from one side, it came again on the other.

Blue Beard returned from his journey that same evening, and said he had received letters upon the road, informing him that the business which called him away was ended to his advantage. His wife did all she could to convince him she was delighted at his speedy return. 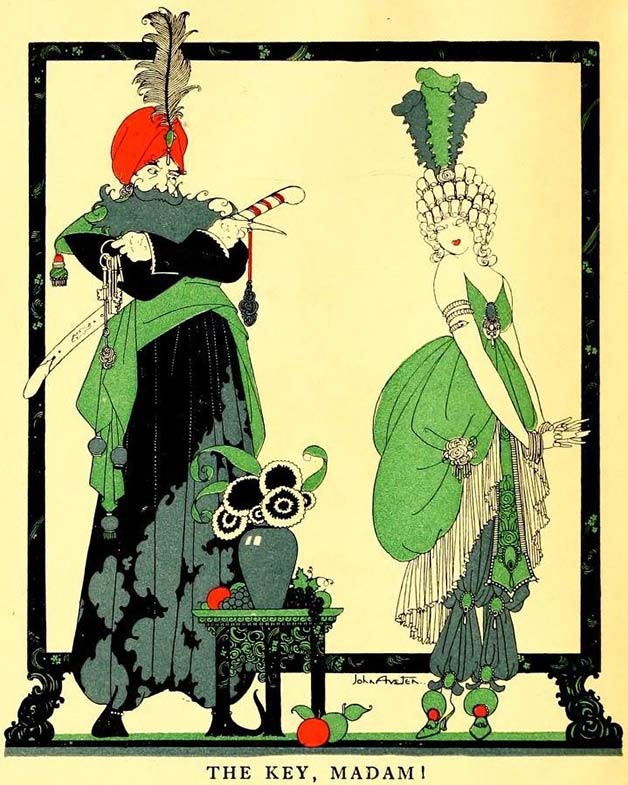 Next morning he asked her for the keys, which she gave him, but with such a trembling hand that he easily guessed what had happened.

“I must certainly,” said she, “have left it upstairs upon the table.”

“Do not fail,” said Blue Beard, “to bring it to me presently.”

After having put off doing it several times, she was forced to bring him the key. Blue Beard, having examined it, said to his wife:–

“How comes this stain upon the key?”

“I do not know,” cried the poor woman, paler than death.

“You do not know!” replied Blue Beard. “I very well know. You wished to go into the cabinet? Very well, madam; you shall go in, and take your place among the ladies you saw there.”

She threw herself weeping at her husband’s feet, and begged his pardon with all the signs of a true repentance for her disobedience. She would have melted a rock, so beautiful and sorrowful was she; but Blue Beard had a heart harder than any stone.

“Since I must die,” answered she, looking upon him with her eyes all bathed in tears, “give me some little time to say my prayers.”

“I give you,” replied Blue Beard, “half a quarter of an hour, but not one moment more.”

When she was alone she called out to her sister, and said to her:–

“Sister Anne,”–for that was her name,–“go up, I beg you, to the top of the tower, and look if my brothers are not coming; they promised me they would come to-day, and if you see them, give them a sign to make haste.”

Her sister Anne went up to the top of the tower, and the poor afflicted wife cried out from time to time:–

“Anne, sister Anne, do you see any one coming?”

“I see nothing but the sun, which makes a dust, and the grass, which looks green.”

In the meanwhile Blue Beard, holding a great sabre in his hand, cried to his wife as loud as he could:–

“Come down instantly, or I shall come up to you.”

“One moment longer, if you please,” said his wife; and then she cried out very softly, “Anne, sister Anne, dost thou see anybody coming?”

“I see nothing but the sun, which makes a dust, and the grass, which is green.”

“Come down quickly,” cried Blue Beard, “or I will come up to you.”

“I am coming,” answered his wife; and then she cried, “Anne, sister Anne, dost thou not see any one coming?”

“I see,” replied sister Anne, “a great dust, which comes from this side.”

“Are they my brothers?”

“Will you not come down?” cried Blue Beard.

“One moment longer,” said his wife, and then she cried out, “Anne, sister Anne, dost thou see nobody coming?”

“God be praised,” replied the poor wife, joyfully; “they are my brothers; I will make them a sign, as well as I can, for them to make haste.”

Then Blue Beard bawled out so loud that he made the whole house tremble. The distressed wife came down and threw herself at his feet, all in tears, with her hair about her shoulders.

“All this is of no help to you,” says Blue Beard: “you must die;” then, taking hold of her hair with one hand, and lifting up his sword in the air with the other, he was about to take off her head. The poor lady, turning about to him, and looking at him with dying eyes, desired him to afford her one little moment to her thoughts.

“No, no,” said he, “commend thyself to God,” and again lifting his arm–

At this moment there was such a loud knocking at the gate that Blue Beard stopped suddenly. The gate was opened, and presently entered two horsemen, who, with sword in hand, ran directly to Blue Beard. He knew them to be his wife’s brothers, one a dragoon, the other a musketeer. He ran away immediately, but the two brothers pursued him so closely that they overtook him before he could get to the steps of the porch. There they ran their swords through his body, and left him dead. The poor wife was almost as dead as her husband, and had not strength enough to arise and welcome her brothers.

Blue Beard had no heirs, and so his wife became mistress of all his estate. She made use of one portion of it to marry her sister Anne to a young gentleman who had loved her a long while; another portion to buy captains’ commissions for her brothers; and the rest to marry herself to a very worthy gentleman, who made her forget the sorry time she had passed with Blue Beard.

Using the site https://en.derevo-kazok.org/ and the materials published on it, you automatically agree to Terms of Use and Privacy Policy. All materials are taken from free open sources, posted on the site for informational purposes and are not intended for commercial use. The list of sources of fairy tales coming to the site is presented on the page "Our Sources".